2K and Gearbox Software today announced Borderlands 2 VR, that will bring the critically-acclaimed and genre-defining shooter-looter franchise to VR for the first time on December 14, 2018 on PlayStation VR. Fans who pre-order Borderlands 2 VR will also be rewarded with instant access to a dynamic PlayStation Theme featuring the game’s four iconic Vault Hunters – Salvador, Maya, Axton and Zer0.

Developed by Gearbox Software, Borderlands 2 VR brings the iconic world of Pandora to life like never before. Fans will virtually become a treasure-seeking Vault Hunter, grab 87 bazillion guns, and face off against the galaxy’s most charming psychopathic dictator, Handsome Jack, to free Pandora from the corrupt Hyperion Corporation.

• Virtually Step onto Pandora: Step into the boots of a treasure-seeking Vault Hunter armed with 87 bazillion possible guns on a quest to line your pockets with loot and free Pandora from Handsome Jack’s clutches. Blast bandits with real-world aiming, punch bullymongs in the mouth, find the perfect gun inside a life-sized treasure chest and inspect it from every angle. Catch-aRide and race across Pandora in first-person view and experience the thrill of a psycho running toward you with grenade in-hand yelling, “Boom time!”

• Virtually Slow Time: Borderlands 2 VR includes new features unique to the VR experience to empower Vault Hunters in their fight against Handsome Jack. With Bad Ass Mega Fun Time (aka BAMF Time), players can use this new slow-mo ability to literally slow the speed of the game temporarily to set up their next attack. In addition, with the option to Teleport, players can glide across Pandora as gracefully as Claptrap (if he had grace).

• Become a Virtual Vault Hunter: Take on the role of one of four playable classes – Siren, Commando, Gunzerker and Assassin – each with unique combat styles and updated skills that leverage the new VR functionality, including the new BAMF Time ability. Whether crushing enemies with Maya’s Siren powers, calling in Sabre Turret reinforcements as Axton, feeling the heft of dual-wielded machine guns as Salvador, or the satisfying swing of Zer0’s sword in an enemy’s back, Borderlands 2 VR immerses players like never before.

• Experience Virtual Improvements: For the first time ever, players can experience the sublime exhilaration of driving around the Borderlands in first-person perspective – accelerating and steering with the joystick and aiming the vehicle’s weapons with their headset. With the use of the motion controllers and headset, players can interact with the menu systems in a new and intuitive way for the platform, easily navigating through the menus by pointing, clicking, dragging and dropping. Players will also have the choice of preferred movement styles. Whether that’s the VR popular pointed-teleportation, or the classic direct movement style with joysticks – your experience should feel good for VR and true to form of classic Borderlands.

• Get Virtually Rich: Borderlands VR brings shoot-and-loot mechanics to VR with bazillions of procedurally-generated guns and gear, each with their own capabilities and modifiers. Procedurally-generated shields, grenades, relics, class mods and more round out your Vault Hunter’s arsenal for maximum power and mayhem. 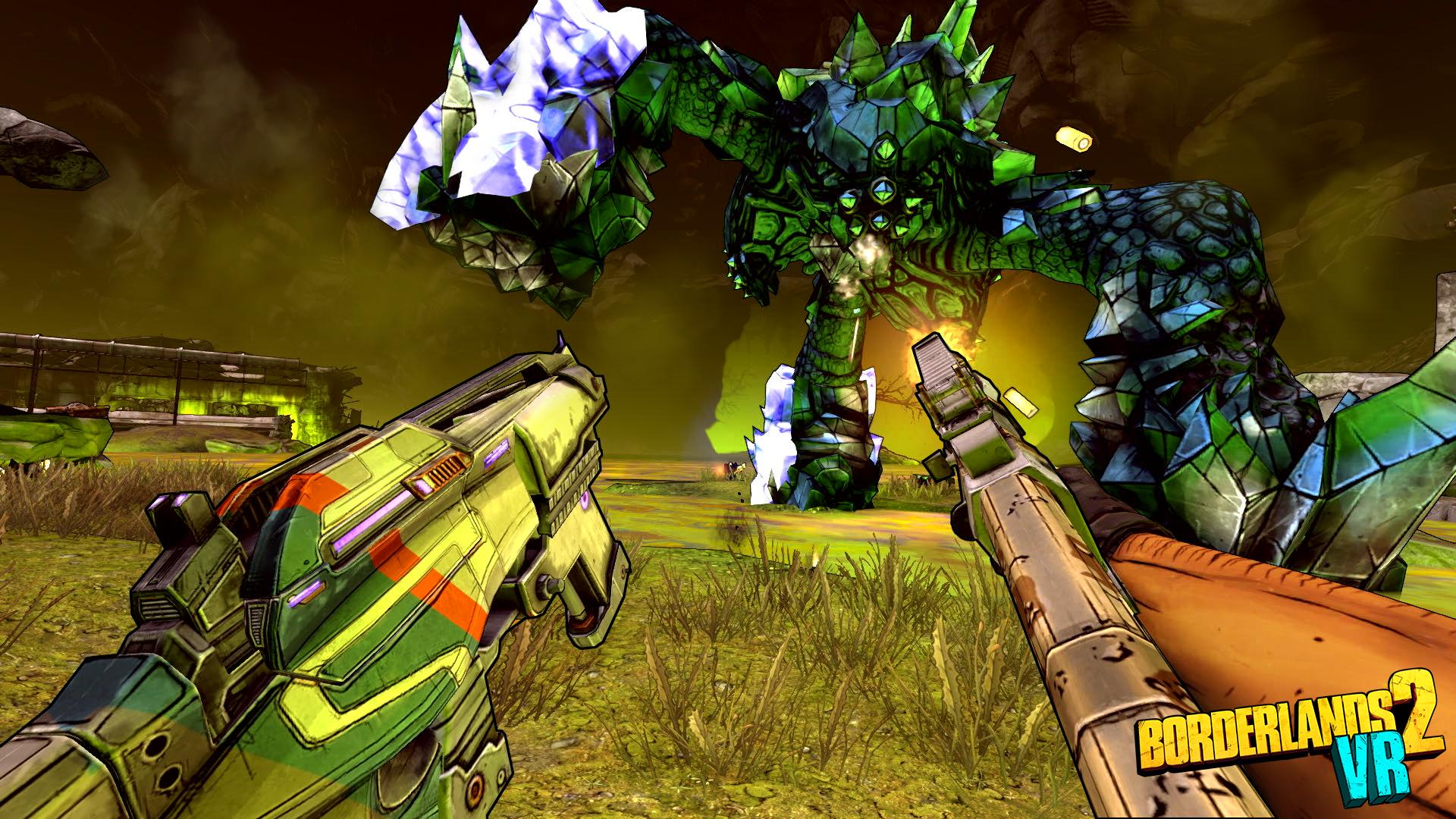