If you’re someone who is interested in Destiny 2 and still hasn’t bought the game since it was supposed to go free-to-play on 17th September, you might have to wait a bit longer.

Shadowkeep would benefit from a little more time on the workbench, so we’re going to take it.

The original plan was to release Destiny 2 New Light, the free to play version of the game along with the Shadowkeep DLC on September 17th. However, it looks like Bungie needs a bit more time to polish this since it’s going to be a huge change to the game. So now they’ve decided to release it two weeks later, on October 1st.

If they get this wrong, they’ll possibly turn off a lot of players from playing the game so it makes that they would rather take the risk of delaying the game rather than release it to the masses with bugs.

If you didn’t know about Destiny 2 going free-to-play here’s a quick gist. Destiny 2 New Light is what it’s been titled and comes with all the Year One content for free.

Developer Bungie has separated from publisher Activision after completing 8 years of the initial 10-year publishing agreement.

Bungie has also gotten all the rights to the Destiny franchise as according to Bungie’s original agreement with Activision, all the new IP that Bungie worked on would belong to Bungie so this makes sense. While under Activision Bungie developed and released both Destiny titles as well as all the expansions and DLCs for those games.

Thank you Guardians. It’s been an honor and a privilege to help bring the world of Destiny to life for you. pic.twitter.com/EB1y19OTD8

Bungie has stated that they will continue to support Destiny 2 and continue to deliver content based on the original roadmap for the game. The game will also remain on Battle.Net for now.

According to  Jason Schreier’s post on Kotaku, employees were more than elated to hear this news and apparently even popped open champagne. According to information given to him, the employees were sick of dealing with the publisher as they felt rushed and restricted with what they could do as Activision was focused more on the monetary side of things. An example of this is that even though the Forsaken DLC was loved by fans, Activision felt it was a let down as it didn’t meet their sales standards.

“We’ll continue to deliver on the existing Destiny roadmap, and we’re looking forward to releasing more seasonal experiences in the coming months,” the company said, “as well as surprising our community with some exciting announcements about what lies beyond.”

Now that Bungie’s Destiny is in their own hands, fans can get their hopes up again as the game may now focus more on the experience rather than how they can monetize it better.  Bungie also has a new game in the works titled “Matter” which is being worked on thanks to the $100 million investment from NetEase. If you want to read Bungie’s full blog post, click here.

Destiny 2 has attracted legions of dedicated fans and has been enjoyed by millions of gamers around the world since launching in 2017. Now, that fanbase is set to grow as new Guardians will be able to enter the world of Destiny 2 for free in November. To celebrate an entire year on PC, Bungie and Activision, in collaboration with Blizzard Entertainment, announce that from November 2nd to November 18th everyone on Blizzard’s Battle.net gaming platform who has not already purchased Destiny 2—or any new members joining Battle.net—will have the opportunity to claim the game as a free gift.

Destiny 2 will be available on the Battle.net app to claim for free for a little more than two weeks in November, and players will have the opportunity to download the game once they’ve claimed it. New Battle.net accounts created after 19:00 BST on November 2, 2018, will be required to enable Blizzard SMS Protect before claiming their game license. Destiny 2 is redeemable from account.blizzard.com/gifts.

Existing players of Destiny 2 PC will receive an exclusive emblem not available anywhere else, which becomes available in December, to commemorate the first anniversary of being on Battle.net. Additionally, new Guardians will have the opportunity to try out Destiny 2: Forsaken’s new mode “Gambit,” from November 9th through 11th 2018, during the Gambit Free Weekend. Gambit is a 4v4 hybrid activity included with Destiny 2: Forsaken. More details are available at DestinyTheGame.com/Battlenet. 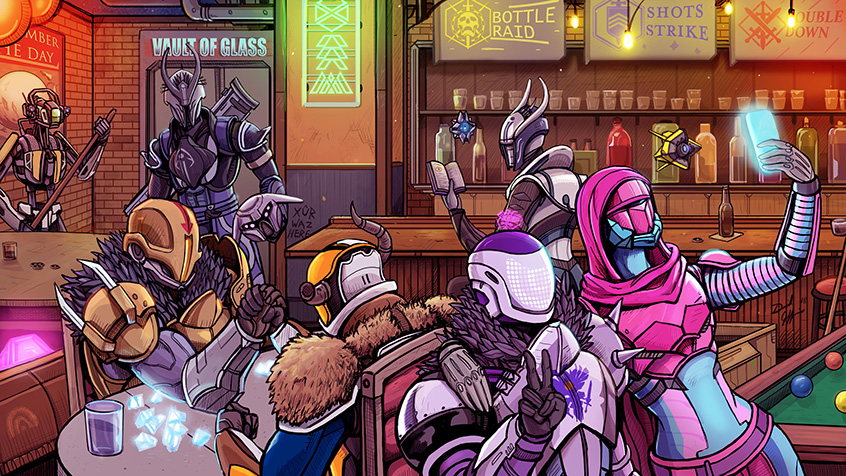 “We know Destiny players that want to play on PC expect an amazing experience, whether it’s on their own or with their friends – so, our paramount concern was to keep the discerning requirements of the PC community in mind, and welcoming the Battle.net and Bungie PC communities together,” said Steve Cotton, game director for Destiny 2: Forsaken at Bungie. He added, “With this gift we look forward to seeing new Guardians in our universe.”

The genre-defining Destiny franchise has received global acclaim since its release in 2014, followed by a record-breaking Destiny 2’s PC launch in 2017, the largest PC launch in Activision Publishing history based on units. Developed by Bungie, and brought to PC in partnership with Vicarious Visions, Destiny 2 delivers a native PC experience with PC-specific features such as: 4K resolution support, uncapped frame rate, full mouse and keyboard support with custom key mapping, text chat, adjustable field of view, a detailed PC settings screen, 21:9 and triple monitor support, and HDR. In the story of Destiny 2, the last city on Earth has fallen and lies in ruins. Players must master new abilities and weapons to reunite the city’s forces, stand together and fight back to reclaim their home.

Destiny 2 is the first installment of the game to come to PC and has quite an active player base. However, Bungie is trying to increase this player base by offering the game free to players to keep if they get it before November 18th.

For the first anniversary of the game’s PC release, it was announced that Destiny 2’s base game would be free to download as long as you had a Battle.Net account. Those who get the game before 18th November will get to keep the game forever. This does not include any of the DLCs. However, it is a good move to get players as if they enjoy the content, they can then decide to purchase the DLC if they want.

The latest DLC, Forsaken, is a really good DLC and with its purchase, you also get the Curse of Osiris and Warmind DLC free. To get Destiny 2, head on over to the Blizzard website and download the Blizzard Launcher. Install it and either sign up or log-in. Once that is done, click on your account name>View Gifts and Destiny 2 should be available to claim. And voila, the game is now yours to keep.

Destiny 2 is still getting a lot of attention from Bungie however that doesn’t mean they haven’t thought about Destiny 3 and what all changes it will entail. Thanks to leaks from a very reliable leaker in the scene, we might know what Destiny 3 will be like.

Reddit user AnonTheNine is a well-known and reliable leaker in the Destiny community especially after he said that the Thunderlord machine gun would make a return soon, which did happen. According to them, the devs have just started working on Destiny 3 with Chris Barrett as the Game Director this time around instead of Luke Smith who still has a big role according to them. They’ve also stated that Destiny 3 is going to be much more RPG focused and hardcore, even going on to say that “a lot of Guardians who play 2 hours per week will abandon the game. They are going balls out with the RPG stuff.” Bungie seems to be doubling down on the RPG aspect and the more hardcore experience for players.

Besides that, there’s the leaked Europa patrol zone. Europa is a one of Saturn’s moon and was first supposed to be in Destiny 1 but was later scrapped and its original concept art is still there. There’s also going to be PvPvE patrol zones where you are fighting for territory. Another surprising and interesting change is that Guardians will now be able to use The Darkness. It will be very interesting to see how they’ll tie that into the story.