Blizzard Entertainment today unveiled the next game in the storied Diablo franchise, Diablo Immortal, a mobile massively multiplayer online action–role-playing game for Android and iOS devices. For the first time ever, Diablo players will be able to answer the call to battle on their phones.

Six iconic and highly customisable Diablo character classes will be available in Diablo Immortal—Barbarian, Crusader, Demon Hunter, Monk, Necromancer, and Wizard—each with new powers and abilities, with more playable classes planned for future updates. Designed to be a living, breathing, and constantly evolving experience, Diablo Immortal will regularly introduce new storylines, new playable character classes, new loot, and all-new challenges—which you can face side-by-side with your friends . . . or foolishly choose to confront on your own.

Players will have many opportunities to meet and socialize with other demon slayers while wandering the wilds of Sanctuary, or while conducting less-dangerous business—like upgrading gear, crafting items, or forming groups before setting off on their next adventure—in the city of Westmarch, Diablo Immortal’s sprawling central hub.

In their quest to cleanse Sanctuary, players will embark on all manner of thrilling expeditions, including taking part in dynamic events across unique public zones, and hacking and slashing their way through instanced dungeons. From the peaceful town of Wortham to the ancient Library of Zoltun Kulle to the suffocating jungle island of Bilefen, players will explore familiar vistas and until-now undiscovered corners of Sanctuary.

Diablo Immortal is a collaboration between Blizzard Entertainment and NetEase Games, who in addition to having developed some of the most successful mobile games in history, have been a longtime partner of Blizzard in China.

‘Diablo Immortal takes the series’ dark, gothic fantasy world of Sanctuary and inimitable Diablo gameplay, and puts it in your pocket,’ said J. Allen Brack, president of Blizzard Entertainment. ‘With their incredible passion for Diablo and proven mobile expertise, the development team has spawned an ultra-responsive and breathtakingly beautiful mobile game, and we can’t wait for players to get their hands on it.’ 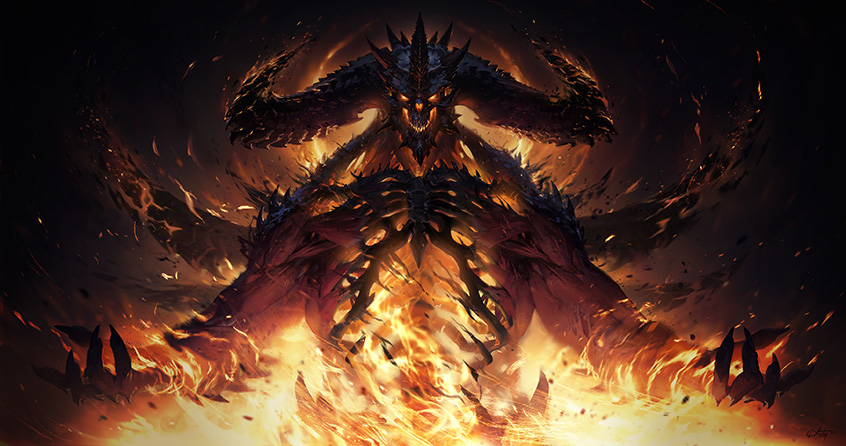 The transition from mouse-and-keyboard or controller to mobile touchscreen device was designed to feel completely natural, intuitive, and fun in Diablo Immortal. Directional controls make it easy to move heroes around the world, and activating a skill is as easy as holding a thumb down on a skill to aim, then releasing it to unleash hell on your foes. And reinforcements are always only a tap away thanks to the native Blizzard Battle.net UI designed specifically for Diablo Immortal, which allows you to chat and form groups with ease in the middle of the most frantic battle.

This new chapter of the blockbuster Diablo saga takes place between the end of Diablo II: Lord of Destruction and the beginning of Diablo III. Leading the invasion of Sanctuary is the demon known as Skarn, Herald of Terror—Diablo’s most powerful lieutenant—who now rallies a new demonic army. Skarn intends to gather the fragments of the corrupted Worldstone and use them to resurrect Diablo.

Those eager to join the fight are encouraged to visit diabloimmortal.com to pre-register for special rewards and be among the first to experience Diablo Immortal. Pre-registered players are eligible to participate in future beta tests and earn in-game rewards, as well as receive news and updates.

Here is a gameplay tralier of the game-

Diablo is a lot of PC gamer’s favourite franchise and rightly so because of Diablo 2 which was an outstanding game but Diablo Immortal caused on outrage and led to the first time Blizzard got booed at Blizzcon.

Diablo 3’s launch was not great and disappointed a lot of fans. Although it has gotten better over the time fans wanted a sequel. Then at Blizzcon, they announced Diablo Immortal. A mobile game sequel. When the crowd started to boo out of disappointment, the presenter on stage said, “Do You guys not have phones?” Not a great way to react to an already upset crowd. During the Q&A session, somebody even asked if this was a badly timed April Fools joke. That’s not the worst part though.

The game has been called out for being what looks like a re-skinned version of Crusaders Of Light, a game made by Chinese company NetEase, who have also made Diablo Immortal. The UI of Diablo Immortal bears a very strong resemblance to Crusader of Light which can also be played on Steam as it as an F2P game. While the UI does bear a resemblance, the game that it’s a clone of is a game from 2017 called “Endless of God”.  Look at the two gameplay videos and you will see why people are upset.

Besides that, Blizzard has tried to delete the trailer video of the game that had a lot of dislikes and uploaded it again with a new URL but the people found out and it got slammed with even more dislikes. They were even deleting comments from the videos. This is a PR Nightmare for Blizzard who has been criticized for not listening to their player base and with antics such as these, it just seems very evident.