Gears 5 is the much-awaited sequel to Gears of War 4 and it’s already become the best selling game for the Xbox exclusive platform including PC this generation and there’s a good reason why. It’s an extremely good game from every aspect so let’s take a look at what makes Gears 5 an absolute must play.

Let’s start off by answering a question that many people probably want to ask. Can a newcomer play this game? And the answer is yes, yes they can. The game has recaps for the original Gears of War trilogy and a separate recap for just Gears of War 4 in case you’ve played through the first three games but didn’t get the chance to play Gears of War 4 and want to get right into Gears 5.

While you might not catch some of the smaller character interactions or callbacks to previous games, you honestly won’t be missing out much and it will further get you to go back and play the older titles.

Speaking of character interaction, I really have to say that the story and writing are great. In a story that’s filled with burly men and space monsters, the interactions that take place between characters feel extremely human. Like when JD and Marcus have a disagreement or when Kait and JD talk about the aftermath of a rather aggressive conversation, it feels so right because that’s how a lot of us would react to such situations.

The story moments in the game are very heavy-hitting and all I’m going to say about it is, prepare yourself because I don’t think anyone was ready for what was about to happen.

And this story is brought to life with stunning visuals. The detail that’s been put into crafting each and every facet of the game just show how much this game means to The Coalition. From the scratches and dents on the armor to the massive sprawling levels that are as intricate as they are big, there’s no visual element at which you can say “yeah, that was just ok”.

The lighting is also a thing of beauty and even though there’s no Ray tracing, it never really felt like the game needs it because of how great the reflections already are. From the dark tunnels and building interiors that have just a few light sources and rays of light to the cities and open areas that are bathed in light, you can always see how nuanced the lighting is.

The impressive part is, it isn’t really hard to run this game on modern hardware because the game is extremely well optimized. Usually, you’ll see systems struggle to run the game well but that’s not at all the case here. Even on the Xbox One and One X, the game both looks great and runs great giving players the Ultimate Gears experience.

Speaking of the Ultimate Gears experience, this game nails what makes Gears, Gears. The cover-based shooting that the franchise has been known for is not boring or repetitive. With the weapon choices that you get and your trusty side-kick robot, encounters are never really boring or drawn out. On the intermediate difficulty setting, the game was fairly challenging and did not feel too simple or too hard. To me, that was the perfect difficulty setting to get an optimal experience but hey, they’ve added in various settings for a reason and that’s to make the game accessible and enjoyable for every type of player.

Multiplayer modes are aplenty this time around with Versus, Horde and Escape along with the campaign co-op mode that supports up to three players that too with split-screen. In this mode, two of the players are humans while the third player plays as Jack, the robot support who can get pretty OP. Meanwhile, Versus is a Player vs Player game mode, Horde is a survival mode where you take on waves after waves of enemies and Escape where you along with two other teammates try to escape a hive after setting off a bomb inside.

There’s plenty of variety for everyone which means that whether you want to play solo or co-op with friends or with random strangers online, you have the ability to do that with all the various modes available to you.

Now on PC, you might have issues with the Xbox Beta app or the Windows Store acting up so make sure to update Windows and all the Xbox related applications fro the Windows Store. I struggled with running the game when I tried installing it on a 2nd PC and after re-downloading the game 2 whole times, it still threw me an error that when googled didn’t help much. The only thing that fixed it was downloading those Xbox-related updates which hadn’t been auto-updated for whatever reason.

In conclusion, Gears 5 is an absolute masterpiece that will please Gears veterans and newcomers alike. With its relatable characters, touching story-telling, gorgeous visuals, and fun gameplay, you’re most likely to absolutely love this game and understand why this is the best game to have come out on the Xbox platform this generation.

We’re just a short time away from the biggest Gears yet with Early Access for either Xbox Game Pass Ultimate or with Gears 5 Ultimate Edition, and today while fans eagerly await its release, we’ve got a brand new trailer showing off Gears 5’s five modes.

In Gears 5, there are five thrilling ways to play: the all-new aggressive, high-stakes co-op mode Escape; the competitive Versus mode, featuring nine modes including the all-new Arcade for players of all levels; the deepest Horde mode ever; the intuitive Map Builder and the biggest Campaign yet.

Yesterday, we shared news about latest blockbuster partnership in Gears 5 with WWE Superstar Batista making an appearance in Gears 5 as a multiplayer character, donning the armor of the legendary Marcus Fenix. Fans can also look forward to the inclusion of Sarah Connor and the T-800 Endoskeleton from Terminator: Dark Fate and Spartans Emile-A239 and Kat-B320 from Halo: Reach with Xbox Game Pass Ultimate and Gears 5 Ultimate Edition. 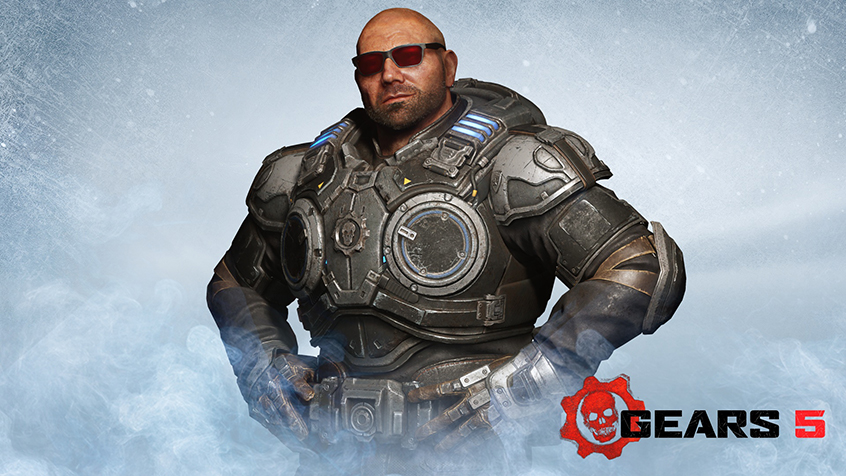 Both Xbox Game Pass Ultimate members and Gears 5 Ultimate Edition owners will be able to gear up and take the fight to the Swarm. On behalf of everyone at The Coalition, we’re excited to have fans jump into the world of Gears 5.

Gears 5 will launch for Xbox One and PC on September 10, publisher Microsoft and developer The Coalition announced at the Microsoft E3 2019 press conference. Pre-orders will include the Terminator: Dark Fate character pack add-on.

Here are the latest details on the game, via Microsoft:

Escape is a new, aggressive, high-stakes co-op mode featuring a three-player suicide squad that must work together to take out enemy hives from within, which we announced at the Xbox E3 Briefing. It’s everything you love about Gears, turned up to 11. Tune into live.gearsofwar.com for the Escape gameplay debut beginning today at 5:00 p.m. PDT, featuring our friends Austin Creed, Tyler Breeze and AJ Styles from the WWE, or experience it for yourself at select Microsoft Stores through June 10.

Map Builder will debut alongside the game at launch. With Map Builder, you can create custom Escape hive maps and experiences to share with and challenge your friends.

Versus mode will make its debut in July with the Gears 5 Tech Test. Join us to be one of the first to play our all-new competitive game type – Arcade–a frenetic experience built for jump-in, over-the-top fun, as well as the next evolution of our esports mode, Escalation 2.0. Access to the Gears 5 Tech Test is included with Xbox Game Pass or by pre-ordering at participating retailers, including the Microsoft Store.

Horde mode will return in August with a hands-on gameplay debut at gamescom that will feature new character abilities can turn the tide on the battlefield.

Finally, the Campaign will debut with the release of Gears 5 into Early Access on September 6. With all-out war descending, Kait Diaz breaks away to uncover her connection to the enemy and discovers the true danger to Sera–herself. This is the biggest Gears campaign ever and the first to feature three-player split-screen campaign co-op. We can’t wait to experience it together with you.

More Choice in How to Play

With Gears 5, we are proud to offer more options than ever to be part of the Gearsfamily. The game will be available with Xbox Game Pass for PC and Console, with early access for Ultimate members, for sale on digital stores including Steam and the Microsoft Store on Windows, and available on disc and digital download from our retail partners worldwide.

As we announced today, we’re pleased to offer the Terminator Dark Fate Character Pack as a bonus offer included with your pre-order or for Xbox Game Pass members who play before September 16.

For the fan who wants it all, Gears 5 will also have a Jack Drone Collector’s Edition, which includes the Ultimate Edition plus a premium collector’s box, a special collectors booklet, an exclusive in-game Jack skin and a functioning flying Jack drone for $269.99 USD at GameStop stores everywhere.9

Here is an overview of the game, via Microsoft:

The world is crumbling. Humanity’s reliance on technology has become their downfall and enemies are uniting to wipe out all survivors. As Kait you must journey across the biggest, most beautiful Gears world to uncover the origins of the Locust, and fight with your squad to protect what’s left.