Square Enix has released a new set of Kingdom Hearts III screenshots, and the game’s official theme song “Face My Fears” is now available as part of the four-track Face My Fears EP, the company announced.

Here is an overview of the song, via Square Enix:

“Face My Fears” is the soundtrack to the game’s opening movie, which sets up players for the events to come in Kingdom Hearts III as the ultimate battle for light and life comes to an epic conclusion. With the help of his loyal companions Donald and Goofy, Sora will team up with iconic Disney and Pixar characters in an attempt to defeat the darkness and save the universe.

Kingdom Hearts III is due out for PlayStation 4 and Xbox One on January 25 in Japan and Asia, and January 29 in North America and Europe.

View all the screenshots at the gallery.

Sora and friends gather for the ultimate battle between light and darkness with today’s release of the latest Kingdom Hearts III trailer.

As unexpected events began to unfold in the Disney worlds at the hands of the enemy’s dark ambitions, the heroic trio of Sora, Donald, and Goofy find adventures ahead, from aquatic battles in the world of Pirates of the Caribbean to dances with the townspeople in the Kingdom of Corona from Tangled. The new footage also showcases Stitch from Lilo and Stitch as a special “link” (summon), as well as cooking-themed Ratatouille Keyblade attacks.

Footage of Kairi wielding a Keyblade and what may be a glimpse of Sora’s Nobody all point to new pieces of the title’s storyline.

It’s just about a month until we embark on another spectacular journey with Sora, Donald Duck and Goofy in a magical array of Disney and Pixar worlds in Kingdom Hearts III. In anticipation, we’re pleased to announce that the Limited Edition Kingdom Hearts III PlayStation 4 Pro bundle will be launching in the U.S. and Canada alongside the game on January 29, 2019.

On PS4 Pro, both 4K TV and HD TV owners will benefit from enhanced resolution for a stunningly sharp and detailed look of Sora, his friends, and iconic Disney-Pixar worlds, when compared to a standard PS4 system.

Fight the darkness in Kingdom Hearts III with this special edition console. Let us know what you think of the system in the comments below! 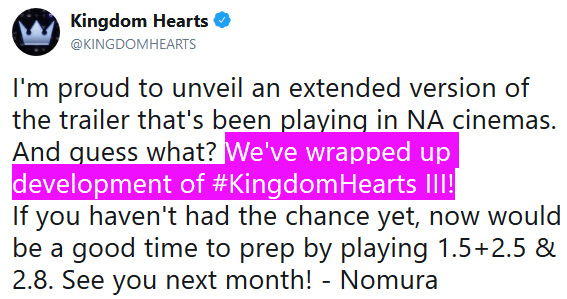 In Kingdom Hearts –The Story So Far–, Keyblade wielders can relive the magical adventures of Sora, Donald Duck, Goofy and friends as they attempt to stop the Heartless invasion that threatens their universe. Fans will travel to iconic Disney locales and join forces with beloved Disney and Final Fantasy characters in order to fight back against the threat of darkness and bring back light to all worlds.

The compilation includes the following games:

Kingdom Hearts –The Story So Far– is now available to preorder at the Square Enix Online Store: sqex.link/KHthestorysofar and other participating retailers.