Here is some background on the suits, via Insomniac Games writer Christos Gage on the PlayStation Blog:

Spidey has a long history with the Fantastic Four, going back to 1963’s Amazing Spider-Man # when our rookie wall-crawler tried to join the team—only to end up fighting them! That was just the beginning of many years of adventure (including the 2010 Spider-Man / Fantastic Four miniseries written by yours truly and drawn by Mario Alberti) that has led us to today, with the new Fantastic Four comic written by longtime Spidey-scribe and game story contributor Dan Slott.

There have been too many cool Spidey / Fantastic Four moments to count, but one of the most memorable in their illustrious history was in Amazing Spider-Man #258, when Spidey swung by the Fantastic Four’s headquarters for help with the alien symbiote he was wearing as a costume (that’s right, it later became Venom). The Fantastic Four got it off, but then Spidey was left in his underpants (we’d never do something that silly in the game… wait, I’m being told we did). So Spidey borrowed a Fantastic Four costume… but they don’t have masks! So, to conceal Peter Parker’s secret identity, his frenemy, the Human Torch, gave Spidey a grocery bag to wear on his head. As The Thing might say, what a revoltin’ development!

Another chapter in their shared story came when Spidey actually joined the Fantastic Four, then calling themselves the Future Foundation, and they all wore cool black and white costumes. Hey, Dan wrote many of those issues, and I scripted one or two myself! That suit was awesome looking because – but you don’t want to hear me yap, look for yourself!

As games get bigger and bigger over the last few years, the open world genre has started to become stale. However, we still have some standouts that refine and reinvent upon the existing formula in interesting ways. So here are our top picks for the best Open World Games of 2018.

So those were our picks for the best open world games of 2018. Did we miss anything? Let us know in the comments below.

2017 was a great year for PlayStation fans, and 2018 has only gotten better. With amazing titles like God of War and Marvel’s Spider-Man, this has been a blockbuster year for the PS4. Without further ado, here’s our list of the top 10 best PS4 games to come out this year (in no particular order, of course).

Whether it’s looks, or story, or characters, Red Dead Redemption 2 is a work of art. It’s an impactful story of loyalty and trust, of murder and betrayal, set against a beautiful but unforgiving environment in the Wild West days. Some gameplay issues notwithstanding, it’s seriously hard to overstate what an amazing job Rockstar has done with this title.

Changing the formula from an angry, young man, Kratos is back as an angry, old father. Taking his son on a journey to scatter his mother’s ashes, the game gives players amazing insight into his relationship with his son, Atreus. Moments where Kratos struggles to express his affection, and a terrible secret that may very well change his son’s life forever. It’s a polar opposite of what the original God of War games were about, and the direction it’s taking is impressive to say the least.

What more can we say about the title that is the only game to ever receive the Marvel Stamp of Approval? It’s got everything you’d want from a Spiderman game. Multiple suits? Check. Swinging across New York from the tallest skyscrapers? Check. Webbing guys up in awkward positions? Checkity check. Also, Mary Jane is really cute, so that’s also there.

4. Shadow of the Tomb Raider

Lara Croft is back, and this time she’s brought the apocalypse with her. After accidentally starting the end of the world, Lara now has to track down the notorious Trinity organization to make sure they don’t get their hands on the artifacts that have the power to reshape the world.

For the first time, there’s a female protagonist featured throughout an Assassin’s Creed title. It is set 400 years prior to Origins, where you get to play as a mercenary, exploring Ancient Greece as you fight your way to glory. Find the secrets that bind your family, take down a mysterious cult and become the best mercenary you can be.

At it’s core, Detroit poses some hard hitting questions, the most fundamental being, “What does it mean to be human?” In a world that is increasingly dependent on technology and AI in every way, the game’s philosophy cannot be overstated.

Battlefield V is a pretty enjoyable Battlefield game. Though it no longer retains the same strategic depth as Battlefield 3 & 4, it is definitely a big step up from Battlefield 1. There are some standout maps, the weapons feels great, and the game is a delight to look at.

Everyone’s favourite assassin is back with a vengeance. Not to spoil too much, but did you know you can kill people by placing a rake in their path? It’s genius, really. Also, to no one’s surprise, the first elusive target is none other than Sean Bean, so fun times galore.

Call of Duty has made a triumphant comeback, with boots on the ground multiplayer and Blackout is easily the best Battle Royale mode around right now.

I know it’s easy to disregard every new FIFA entry as the same as the previous year’s game However, hardcore fans and veterans of the series can appreciate even the smaller improvements and roster updates, and FIFA 19 is an easy recommendation to bring a few friends together over an enjoyable round of football.

So those were our picks for the best PS4 games of 2018. Did we miss anything? Let us know in the comments below.

2018 was nothing but a blockbuster year for video games. The entire year has slapped us in the face with amazing titles, one after the other. Sure, it’s quite hard (not to mention unfair) of us to pick just 10 of those and tell you about it, but you know, someone’s gotta do it. So here are our top 10 games of 2018.

So those were our picks for the best games of 2018. Did we miss anything? Let us know in the comments below.

Graphics have always been a big part of what makes video games fun. It’s pretty much what most consoles base as their main selling point, and graphical prowess often becomes the big part of discussion among most AAA games. 2018 had a lot of great looking titles, and here are our top 10 favorite picks:

So those were our picks for the best looking games of 2018. Did we miss anything? Let us know in the comments below.

A Note From Spider-Man’s Game Director on Silver Lining

Silver Sable has stormed back to reclaim her stolen Sable International tech. With New York Police Chief Yuri Watanabe on administrative leave following her exploits against Hammerhead, Spider-Man will have to rely on unlikely allies to keep Marvel’s New York safe.

We’re also very excited to be partnering with Sony Pictures on the upcoming film Spider-Man: Into the Spider-Verse, in theaters December 14. We are offering a special promotion where users who pre-order the Spider-Man: Into the Spider-Verse film from PlayStation Store will receive a voucher for Marvel’s Spider-Man: Silver Lining, a dynamic theme, and avatars as their pre-order incentive. As you may have seen at the end of our teaser trailer, we have included Peter Parker’s suit from the movie into our third DLC chapter. Pre-orders for the movie officially start tomorrow and then you’ll be able to unlock and swing around in the film’s version of Peter Parker’s suit once Marvel’s Spider-Man: Silver Lining launches on December 21!

It was a real pleasure working in partnership with Sony Pictures and Marvel to bring this suit to the game — and we can’t wait to see what you do in photo mode with it! You’ll also be able to unlock the Cyborg Spider-Man suit and the Aaron Aikman Spider-Armor.

We also have new art from acclaimed Marvel artist and suit designer Adi Granov. With this, the whole triptych is now complete, with images for all three chapters. 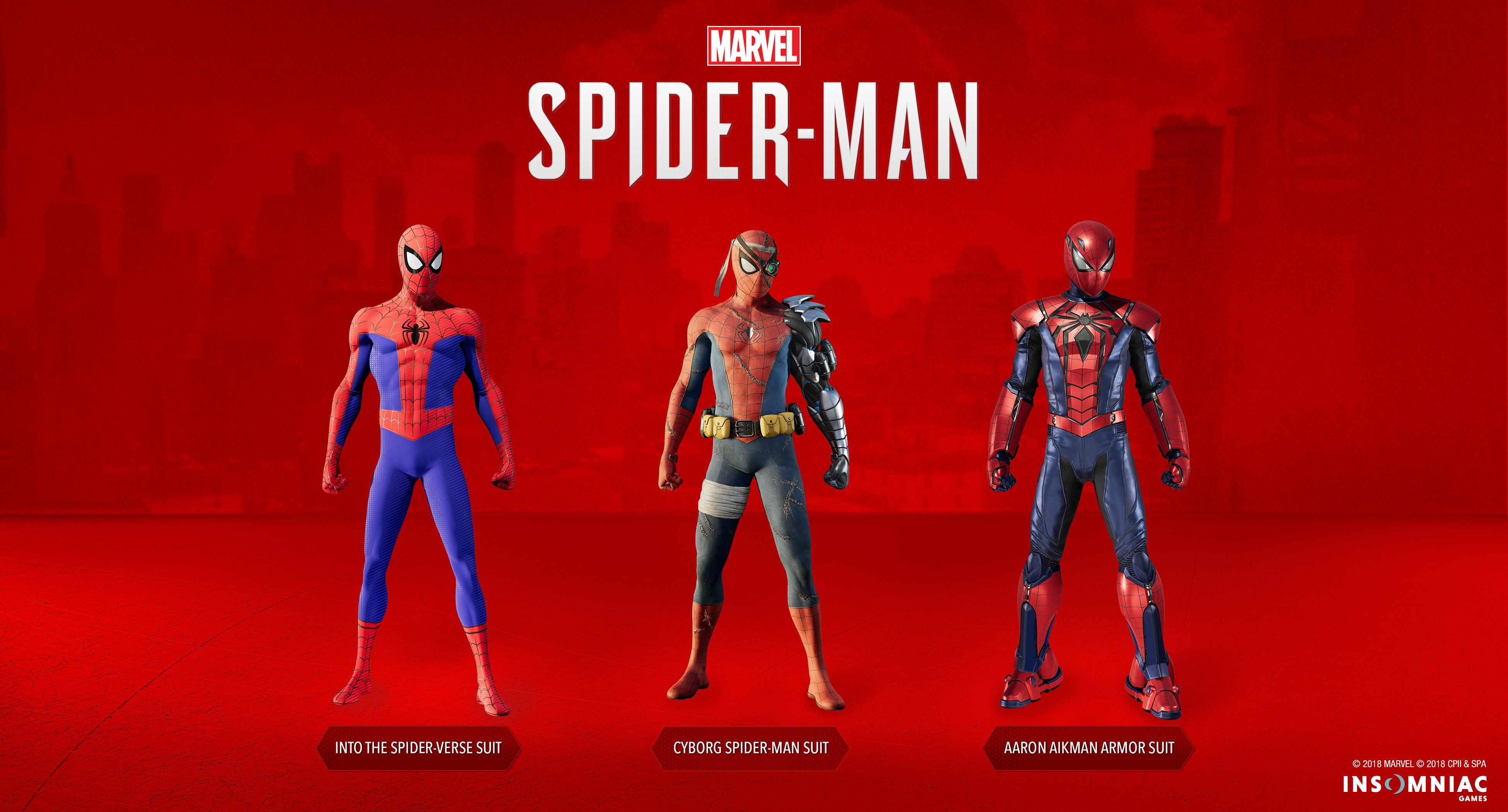 It’s been a crazy ride for us here at Insomniac Games as we have spent the rest of 2018 developing this additional content for Marvel’s Spider-Man. We’ve been so grateful for all of your notes, comments, feedback, and support over these last few months. We hope you enjoy Marvel’s Spider-Man: Silver Lining when it releases on December 21!

Here at Insomniac Games, we’ve had a terrific time expanding our new and original Spider-Man story. We hope you enjoyed returning to the game recently, whether it was for New Game+ and Ultimate Difficulty, or to meet Black Cat in the first chapter of Marvel’s Spider-Man: The City That Never Sleeps – The Heist. And, of course, if you haven’t yet checked out Marvel’s Spider-Man: The Heist, what are you waiting for?

With that said, we’re ready to give you a first look at the next chapter, Marvel’s Spider-Man: Turf Wars. 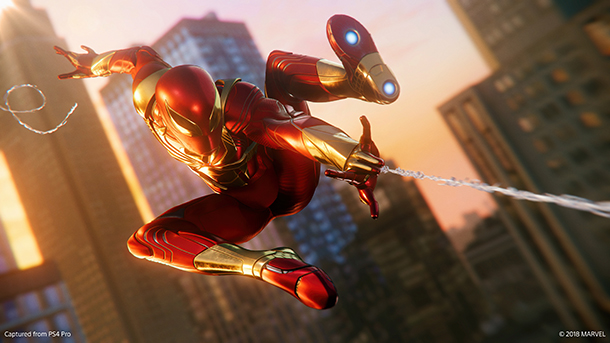 As we hinted in Marvel’s Spider-Man: The Heist, Hammerhead is the main antagonist in Marvel’s Spider-Man: Turf Wars. First appearing in the 1970s via the pages of Amazing Spider-Man comic book, Hammerhead — the organized crime boss known for his obsession with the mob’s glory years and a cranium surgically enhanced into a deadly weapon — has declared war against the other Dons of the Maggia, and are using equipment left by Sable International during its occupation of Marvel’s New York. Spider-Man and Yuri Watanabe will have to team up to put an end to the violence that has erupted in the streets of the city. 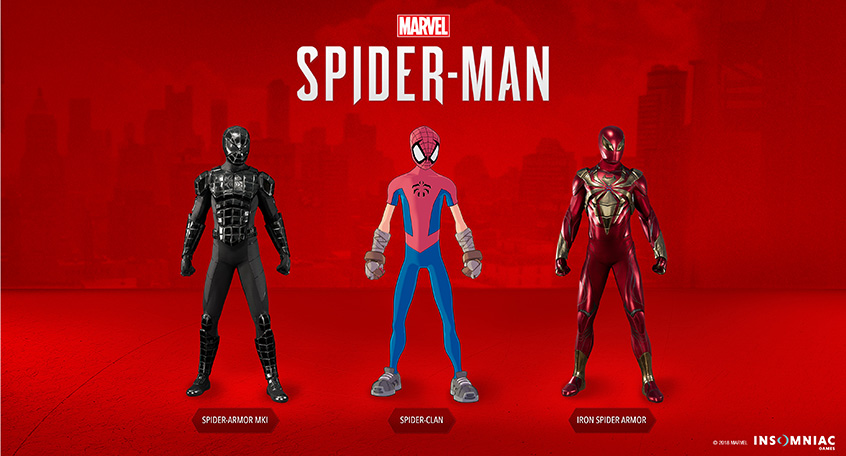 Finally, we have my favorite suit in this drop – the Spider-Clan Suit, which leaps directly out of the pages of the Marvel Mangaverse comic books. We know how much you love these animated-style suits — and we cannot wait to see what you do with this one in Photo Mode!

As with Marvel’s Spider-Man: The Heist – we have a brand new piece of art to share. We once again worked with famed Marvel illustrator and suit designer Adi Granov on this new image. It’s been a pleasure to continue working with him to create amazing new art for the post-launch DLC. You’ll also notice it features Spider-Man in his Velocity Suit – which was designed by Adi and that you can unlock in Marvel’s Spider-Man (we know many of you have already!).

Haven’t played Marvel’s Spider-Man yet but want to check out the game and its DLC? The Digital Deluxe is an especially good value, including the full-game and all three Marvel’s Spider-Man: The City That Never Sleeps chapters for MSRP $79.99 USD.