Rule the ring with Street Fighter V: Champion Edition, the most robust version of the acclaimed fighting game! This new version includes all content (excluding Fighting Chance costumes, brand collaboration costumes and Capcom Pro Tour downloadable content) from both the original release and Street Fighter V: Arcade Edition. Champion Edition adds each character, stage, and other content that released after Arcade Edition and will include all launch content coming to this new version.

Fighters can battle their way through a variety of exciting single-player and multiplayer modes designed for players of all skill levels, including Story Mode, Arcade Mode, Team Battle, Ranked Match, Casual Match, and more. If you haven’t yet hit the streets, this is the perfect time to join the fight. 40 characters, 34 stages, over 200 costumes—all action-packed into one knockout edition! READY? FIGHT!

The initial Street Fighter V purchase is still the only one that consumers need to make to ensure they always have the most up-to-date version of the title. All game mode additions and balance updates are free for owners of any Street Fighter V version. Additionally, all downloadable content characters remain earnable completely free of charge through completing various in-game challenges and receiving earned in-game currency, called Fight Money. For those who can’t wait, in-game content can be obtained instantly using real money. Certain additional content can only be acquired using Fight Money, which can be earned through normal gameplay.

• New Features: In addition to the main game and the included characters, stages and costumes, the following new content will be released for Street Fighter V: Champion Edition and will be available as a free update to current players prior to the release of Champion Edition:

– New V-Skills: Each character will receive a new V-Skill 2, adding even more depth to the combat system.

• New Challengers: 11 new challengers (including Gill) have been added to the game after Arcade Edition and will be included in Champion Edition, with one additional soon-to-be announced character bringing the total to 12. All downloadable content characters released after the original version are available for current players by using earned Fight Money or real money.

• Stay Updated: The initial Street Fighter V purchase is still the only one that consumers need to make to ensure they always have the most up-to-date version of the title.

Street Fighter V: Arcade Edition looks to add more characters to its roster ahead of EVO 2019 and they’ve brought back a fan favourite that everyone has been waiting for.

The new characters are E.Honda, Lucia, and Poison. E.Honda is a fan favourite character stemming from the days of Street Fighter II. Fans of the game were pretty upset when E.Honda wasn’t part of the base game so it’s good to see that they’re finally adding him back in.

The other character that has been added is Lucia, a character who first made their debut in Final Fight. This is her first appearance in a Street Fighter series.

The final character introduced is Poison. Poison is a character that also first debuted in the Final Fight game as an enemy before being introduced as a playable character in Ultra Street Fighter IV.

These characters will be available along with their alternate outfits on 5th August.

Kage, the Embodiment of the Satsui, has Arisen in Street Fighter V: Arcade Edition!

Capcom Cup 2018 is now complete with the spotlight being shifted to the future. But with every light comes a shadow. Kage, the Embodiment of the Satsui, rises as the newest character and the beginning of the next season in Street Fighter V: Arcade Edition!

The Satsui no Hado is a dark force tied to the more sinister aspects of the human soul, including the hunger to survive, destroy, and conquer. Those who learn to control it become nearly unstoppable, but at the cost of their humanity. Akuma is one of these beings. In the past, Ryu was constantly struggling with keeping the Satsui no Hado at bay. If he was hypothetically unable to control it, Evil Ryu would manifest and bring a dark obsession to the otherwise peaceful Ryu. However, after the events of Street Fighter V: Arcade Edition, Ryu was able to overcome the Satsui no Hado’s temptation to ensure Evil Ryu would never see the light.

However, the Satsui no Hado living within Ryu became sentient and would rise as the entity known as Kage, meaning “shadow” in Japanese. Kage lives to prove Ryu is nothing without him and seeks to challenge Akuma and Sagat, two of Ryu’s most notorious rivals. Will Ryu succumb to Kage’s schemes?

Kage’s move set may resemble Evil Ryu’s, but the embodiment of the Satsui no Hado has his own twist on the abilities you may be expecting.

Hadoken – Kage’s Hadoken sees him emitting energy from his palm, but doesn’t create a traditional fireball, at least in the grounded version. The airborne version of Hadoken emits a fireball horizontally in the air.

Shoryuken – Kage wouldn’t come from Ryu if he didn’t have this iconic move!

Kurekijin – Kage jumps off the ground and rotates only once to deliver a single kick. Kurekijin can also be used in the air.

Ryusokyaku – Similar to Evil Ryu’s “Axe Kick” where he lifts his leg in an arcing motion and slams it down on the ground. 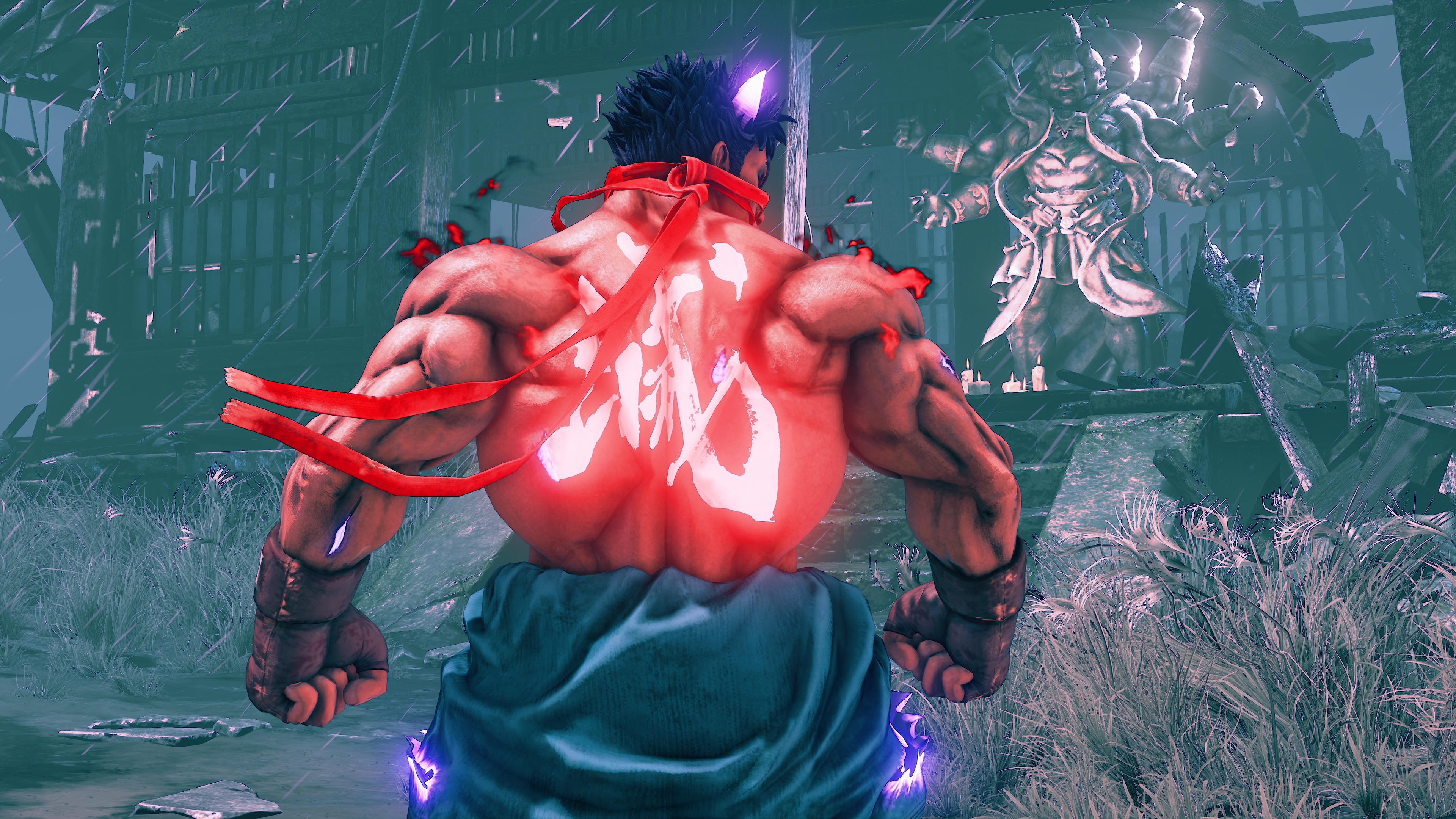 V-Skill: Senha Kassatsu – Kage gathers energy into his fist and lunges forward to punch the opponent. Senha Kassatsu has armor and can be charged for a more devastating blow.

V-Trigger I: Taigyaku Mudo – In this two-bar V-Trigger, Kage unlocks Ashura Senku, a teleport move that is performed by pressing HP+HK. Ashura Senku can be used on the ground and in the air as an air dash, which opens up multiple mix-up options and flashy combos. Taigyaku Mudo also improves Kage’s V-Skill so that he can now combo into it while the fully charged version will crumple the opponent.

V-Trigger II: Rikudo Osatsu – In this three-bar V-Trigger, Kage unlocks Misogi, a move that sends him into the skies before crashing down on the opponent by pressing HP+HK. Misogi can be cancelled into by a number of normal and specials, including blocked sweeps, which makes it a pressure monster. 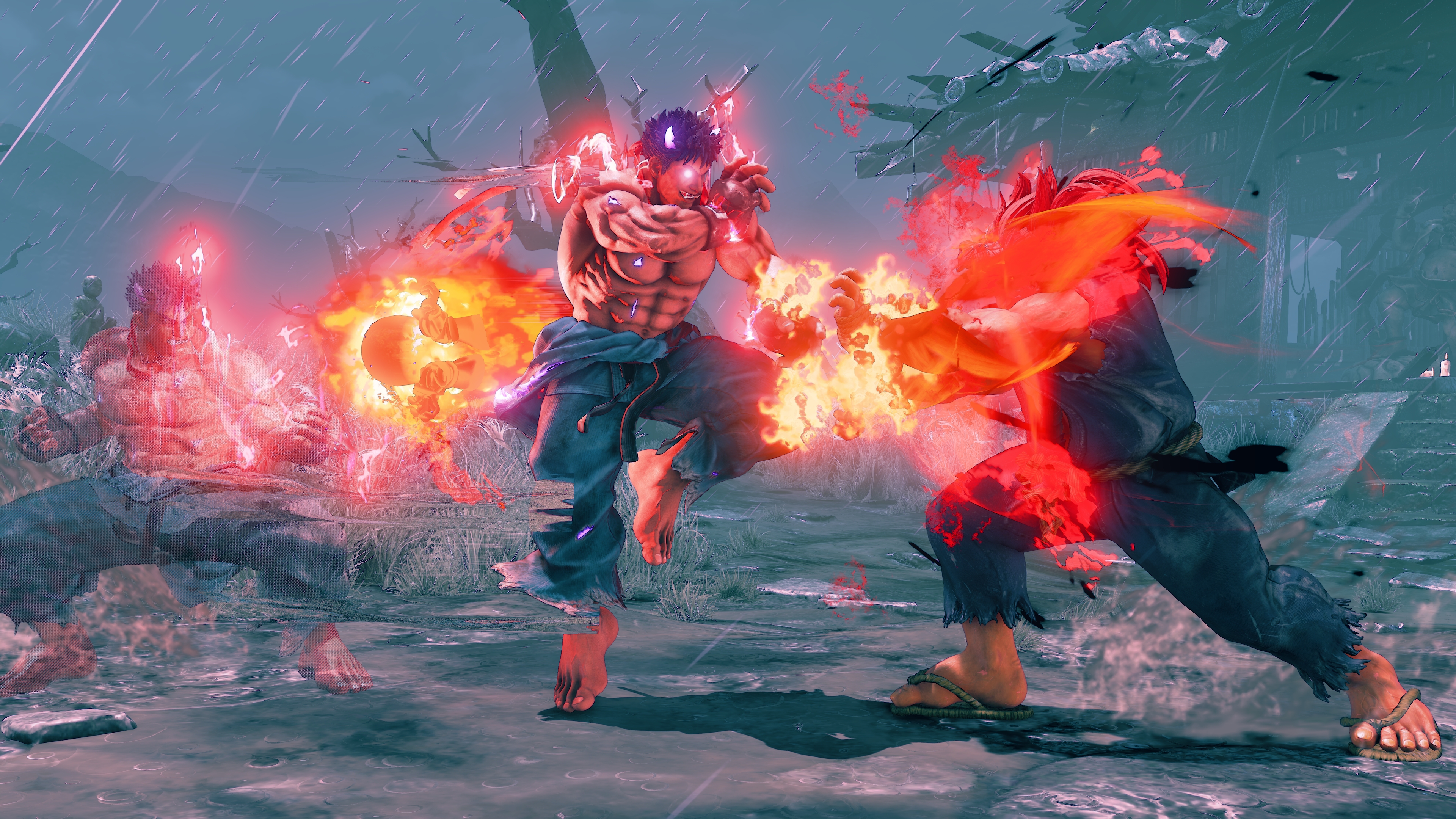 Metsu Shoryuken – Ryu’s iconic super from previous games lets everyone know that Kage is indeed a part of Ryu. Kage does a devastating upper cut that ends in a flash full of red.

Shun Goku Satsu (V-Trigger II only) – Kage wouldn’t be the Satsui no Hado without having the Shun Goku Satsu! While only available in V-Trigger II, Kage’s version of the Raging Demon can be used to end particular combos with his signature red gracing the screen afterwards.

Kage’s Story Costume resembles a wilder version of Evil Ryu complete with the burned hole in his chest. Kage’s hair is grown out, his gi is on his torso instead of draped around his waist, and a large rope holds it all together.

On the other end of the spectrum, Kage’s Battle Costume is bright, ornate, and regal. Perhaps this is what Kage envisions himself as at the height of his power?

Kage is only the beginning of the next season of Street Fighter V: Arcade Edition! We’re doing things differently this year, so we’re eager to share the details with you soon! Thank you for all the continued support. We can’t wait to show off what’s next in 2019!